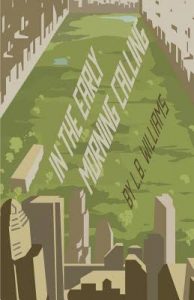 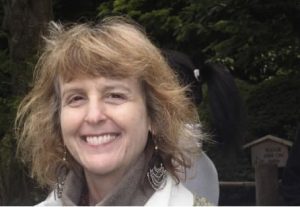 I had become acquainted with L.B. Williams’ work for an earlier review in Mom Egg with her chapbook The Eighth Phrase, and learned how she deftly entwined place, rite of passage, angst, and ecstasy to create imagistic and memorable vignettes. It’s an attractive and curious little tome (a small square booklet of 16 poems with a bright, surrealistic cover) that catches one’s attention and opens into a much larger vista of ideas with each page.

Her recent collection, In the Early Morning Calling, also presents as interestingly as it reads: the cover’s color and imagery seem camouflage at first glance but opens into a sprawling urban landscape of a park surrounded by buildings. This duality is played with as Williams takes us through New York neighborhoods of personal significance, experienced with a Buddhist sensibility. The immediate and elusive mingle as the observed moments in contemporary life are interwoven with spiritual query, the juxtaposition of exotic and familiar, the persistence of memory and the ephemeral. We begin with “Where Do They Go?,” inspired by Basho:

What if we hear the sound of a cuckoo from Kyoto
And long for a city where we already are?

It’s a melody on a radio,
something familiar but forgotten

that makes me miss what I already know is gone.

This delicate strategy is echoed in other poems, such as “The Moths,” with its simple images that summon a reference to Virginia Woolf, who “first named her novel, The Moths,/then changed it to The Waves.” Again, a cycle of observation, discovery, preservation, and the constancy of nature defines life, even in our absence:

She wanted to record
What remains when we are
no longer here.

I walk outside—
hundreds of them
Gather in bushes.
Or they wait on screens,
Wings folded.(9)

I had to admit that this book made me nostalgic in two ways. I was familiar with some of the he streets and locations of a New York that I grew up in; and the driving force (and referenced influence) of Nichiren Shoshu Buddhism, a Japanese spiritual practice that focuses on the power of pre the individual to reflect, transform, and contribute to world peace. I had been involved, for a time, in the 70s, with this form of Buddhism, and went through an indoctrination ceremony and given a scroll by a priest (there are notes in the book that include spiritual figures and clarify the poet’s personal philosophy connected to this religion.). But the unfamiliar reader does not miss the heightened sense and desire for awareness, skillfully connecting relationships, changed landscape, and random moments to enlightenment. “On Attaining Buddhahood” builds in imagery and action quietly, from “Just a flowered curtain hanging by wooden shutters” to “…down second Avenue/where workers with lanterns tread into the night/digging for trestles and track,…” creating a path of immersion, nostalgia, and reflection on existence and wisdom, to a subway ride that becomes a revelatory tour of the past: “…swiping turnstiles down steps…/and backwards to the Flushing line,…

Shea Stadium turned to Citi Field over the decades,
My mother and brothers have moved to the ocean
While I remain in New York City surrounded by ancestors
Who hover over Peter Cooper Village on East 27th Street,
Where my grandmother Eva would sit in a white fake leather chair.(9)

Williams, devoted to both religion and craft, carefully weighs the enormity of love and the emptiness of loss, whether of people or places or pieces of the self. She wanders and wonders at the trials of staying grounded throughout the vagaries of life, the rewards of truly being in each and every moment.