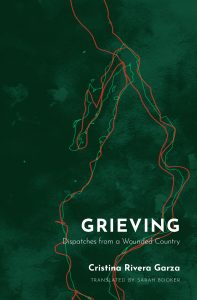 Cristina Rivera Garza is an award-winning writer, poet, translator, and critic. She is the recipient of the Roger Caillois and Anna Seghers Prizes, and the only two-time winner of the Sor Juana Inés de la Cruz Prize. She is currently distinguished professor of Hispanic studies at the University of Houston. Sarah Booker is a Spanish-to-English translator and PhD candidate at University of North Carolina, Chapel Hill. Her research revolves around contemporary Latin American narratives and translation studies.

This book is an act of resistance against the institutional violence of Mexico and the US, and shines a light on the policies that make poor Mexican bodies, especially female bodies, disposable.

On July 16, 1990, Liliana Rivera Garza, my younger sister, was the victim of a femicide. […] I did not write to avoid pain, just the opposite. I wrote, and write, to grieve with others, which is the only secular way I know how to keep her alive. (9)

Rivera Garza’s pen is unflinching in recounting the atrocities committed against civilians, and explains, “It is difficult, of course, to write about these things. In fact, the very reason acts like these are carried out is so that we are rendered speechless by them.” (1)

I read this book slowly, with more breaks between essays than I usually need, but the subject matter is necessarily brutal, and witnessing it, even vicariously, was harrowing. This essay collection is a dirge—a slow and deliberate act of mourning, and a call to humanity.

…the bodies of all Mexicans were transformed from vulnerable—a regular mode of the human condition—to helpless—an artificial state caused by torture. In its indifference and neglect, in its intricate understanding of the political and even the public, in its indolence, the Visceraless State thus produces the eviscerated body: those chunks of torsos, those legs and feet, that interior that becomes exterior, hanging. (5)

I often felt helpless reading this book, yet I understood the power of Rivera Garza’s words and the necessity for me, a white American woman, to read them and not look away. My privilege lies in not having to look, not knowing, and the loss of that privilege is a necessary pain in belonging to the human, female population of the world. I join the writer in losing my words over the horrors inflicted on innocent people.

Mouths gaping, hairs standing on end, cold as statues, truly paralyzed, we have done the only thing we could do in the face of such horror: part our lips and mouth wordlessly. (6)

The overall tone of this collection is scholarly, as Rivera Garza deconstructs the effects of fear on a population, and connects the grieving of a generation. While she writes of the universal grief, she does so with an eye for the personal. As a mother, I couldn’t help but see my own children in her words:

War interrupts the adolescence of a group of friends, forcing them to go directly from childhood into adulthood, the kids of Ciudad Juárez were not able to ride their metaphorical bikes over the summer of their lives. (43)

Rivera Garza’s prose is elegant and scathing as she takes the reader through the #MeToo movement in Mexico: #RopaSucia (dirty laundry) and #MiPrimerAcoso (#MyFirstAssault). She writes about the power of the collective voicing of misogynistic acts, and it is here that we find the courage and hope—not from politicians or the legal system, but in the voices of everyday people refusing to be silenced. “Something happens when open secrets—ones we all know about and discreetly share—are enunciated in public.” (90)

The essay, The Longest Sunday (114-122) leaves the scholarly perspective and delves into the emotional heart of the experience when Rivera Garza visits the mother of two murdered boys. Here the story is personal. We are shown one family with bloody handprints still on their walls. Rivera Garza slows time to a crawl as her gaze lingers on sand falling through fingers, the journey of a beetle. She writes, “I remember her voice broke, sometimes, when talking about them, about her sons.” (118) My heart broke along with hers.

Rivera Garza takes us through the 2016 election, at which point she has lived in the US for 30 years, and up to the COVID pandemic, when her mother had to return to Mexico, where she had full health care. She captures concisely the disconnect of Zoom and the struggles with teaching remotely. The collection is vital in its timeliness.

The final essay, Keep Writing, is by far my favorite. Here the tone shifts to a more lyrical, interior style. Every segment starts “because..”

Because in the rectangle of a page I am nourished and I dream and I plunge and I die. Because there, too, I am reborn. We are reborn.

And here, in the defiance and dedication of writing, we find strength, solidarity, courage to continue on.

Lara Lillibridge is the author of Mama, Mama, Only Mama (Skyhorse, 2019), Girlish: Growing Up in a Lesbian Home (Skyhorse, 2018) and co-editor of the anthology, Feminine Divine: Voices of Power and Invisibility (Cynren Press, 2019).